Ireland Baldwin’s parents are out of town and she wants you to come over and have sex with her.  The Superficial

Prince William might be unemployed soon, somehow I think that’s going to work out better for him than most other people. Lainey Gossip

You know you’ve hit a new low when Jessica Simpson has been charged with looking after you. ICYDK

Kim Kardashian is rolled up an smokin’ IDLYITW

I’ve been trying to keep the Lindsay Lohan posts to a weekly update, because the truth is, this lil’ leprechaun is so busy stealing gold and eating children, it’s hard to keep up!

Let’s start with the above picture of Lindsay sitting on the floor under a table in a Brazilian nightclub. Lindsay’s in Brazil, getting paid to promote a clothing line, but it’s unsure if it’s their clothes she’s smearing with spilled drinks and vomit, my guess is probably. Lindsay is under the table because she didn’t want to be photographed and if you’re trying not to be seen, the best thing to do is go to a crowded nightclub and crouch under a flat surface that’s open all sides. She’s a modern-day Houdini!

Before jet-setting off to Brazil, Lindsay did a guest appearance on Charlie Sheen’s Anger Management, burning another bridge with the one person high enough to still hire her by stealing from the show’s wardrobe. From TMZ:

Lindsay acknowledges, she walked off with 2 bracelets, a necklace, sunglasses, a pair of shoes, gold earrings, a silk bathrobe, lingerie and tap shorts.  She claims the wardrobe person was well aware she had the goods and claims the wardrobe lady specifically said it was A-OK and the cost would be deducted from her salary. Lindsay’s also telling friends, she’s NOT going to return the stuff, because as far as she’s concerned she paid for it.

That sounds fair enough, but this is Lindsay we’re talking about, so of course that’s not what really happened.

Sources from the show tell TMZ … Lindsay walked off with the bracelets, the necklace, earrings and shoes BEFORE there was any discussion about leaving with the stuff.  We’re told the wardrobe person told producers she was not going to become a cop and block Lindsay from leaving the set with her stuff, so she told her the value of “all missing items” would be deducted from her paycheck… Multiple sources on the set tell TMZ Lindsay was “the biggest prima donna ever on ‘Anger Management.'”   We’re told she showed up 2 hours late the second day, refused to come out of her trailer for 2 hours, left early to go clubbing and threatened not to return. Sources say the crew broke out in applause when she left, calling her a “nightmare.”

At this point I’m beginning to think Lindsay may be the greatest actress on Earth, and this is a  big social experiment meant to be a scathing indictment of our obsession with celebrity and our values as society as a whole, as we all stand aside and watch a once promising young person self-implode before our eyes, and then I realize, no, she’s really that stupid.

Looking like a real-life, $20-hand-job escort instead of just playing one on TV, Jennifer Love Hewitt tweeted this picture of herself on the set of her Lifetime show The Client List in full bridal regalia with the caption “Today’s work… Why am I dressed as a bride?”

This is a figurative question, because the truth is Jennifer dresses up like a bride every night and has a pretend wedding with her cats and a cardboard cut-out of Adam Levine.

As much as Jennifer Lopez likes to pretend that she’s a real down-to-earth, icon of altruism,  occasionally a report gets out that show she’s really a demanding harpy whose ass consumes more calories daily than your typical African child. Like this report from the New York Post saying J-ello was in talks to perform in the opening ceremonies of India’s premier cricket league, an event that typically draws in 60 million viewers, but the deal fell apart over her outrageous demands.

Sources tell us the pampered pop princess’ manager,Benny Medina, had asked that a private plane be made available for her, along with numerous hotel rooms to house her huge entourage, which included an army of stylists, assistants and a personal chef.

Officials at the Pepsi IPL balked at their demands and instead booked rapper Pitbull for the opening ceremony, next Tuesday, which will also feature some of Bollywood’s biggest stars.

Great move demanding a private jet from a country whose per capita income is $3,500 with over 40% of its population living below the international poverty line of $1.25 a day. Personally I can’t even see J-ello stepping foot in a country like India,  all those dirty, barefoot children running around must be a real joykill. Plus, her ass is about two feet wider than the typical Indian car. 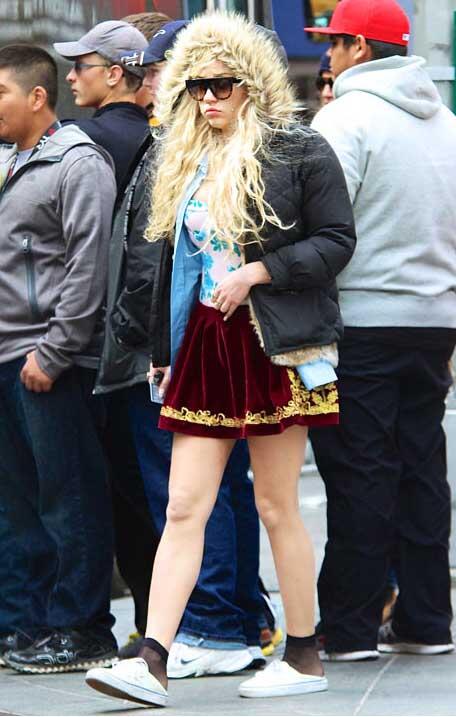 Following the playbook “How to Destroy a Once Promising Career,” produced, written, directed and starring Lindsay Lohan, Amanda Bynes has taken to Twitter threatening to sue US Weekly and Perez Hilton for suggesting she’s mentally unstable after she was photographed leaving a McDonald’s in Times Square with a blue shirt over her head.

“I’m suing @usweekly & @perezhilton for continuing to act like I’m doing something wrong by tweeting and walking to photoshoots. F–k you!!!!” Amanda Tweeted.

Then like most mentally unstable people, she completely forgot what she was so upset about, tweeting a few minutes later “Check my twitter for updates on my clothing and perfume line plus pix!”

When asked for comment about her potential lawsuits Amanda replied, “Frogs don’t need bicycles when they have helicopters, but the pencils just ride around on microwaves. Why are you trying to read my mind?”

The only reason anyone cares about Rob Kardashian or what he does is because one time his sister filmed herself having sex with the brother of an actual celebrity. Still Following?

Despite this, Rob still thinks it’s important to maintain some kind of positive public image. So when a female photographer photographed him with his shirt off yesterday, Rob manhandled her and stole the memory card out of her camera, because the lighting was bad and he didn’t have the right make-up on and she wasn’t using the most flattering filter. No, really it’s because he’s fat and he didn’t want images of his burgeoning gut and jiggling titties posted all over the internet. If only Kim has those kind of standards.

If you ask anybody that knows me, they’ll tell you I drive like old people fuck: Disappointingly slow while listening to public radio. And if there’s one thing I hate, it’s people who think speeding on public streets is a legitimate hobby. If you’re going to do something illegal for you kicks, get into drugs, you’ll have way more fun, and probably have an occasion or two when you think you really are driving a car but you’re actually just sitting on the couch. Plus, drugs never hurt anybody.

What I’m getting at here is that Justin Bieber had a knew Ferrari delivered to his gated Calabasas home, and felt the need to race the thing through residential streets at 100mph. Watch out for cats!

The man — a 47-year-old successful businessman and father of 3 — went onto Justin’s Calabasas property and screamed, “You can’t drive like this!”  The man told deputies, Justin responded by saying , “Get the f**k out of here,” and then he spit in the guy’s face and said, “I’m gonna f**king kill you.” The man filed a battery report and we’re told he wants Bieber prosecuted and will not back down.

The only way a 5’2 noodle-armed wiener could pull a move like that without having his face ripped off is he was surrounded by his hulking bodyguards, which he was. But, apparently, the DA takes charges of spitting very seriously and is investigating.

So remember, it’s acceptable to drive coked-up and drunk through the streest of LA county, with a trunk full of stolen jewelry and hit a few non-famous people along the way, but you goddam well better not spit on anybody!