If you ever wanted to know how the Kardashian family has managed to infiltrate every dark, sweaty, lint-filled crevice of the media, look no further than TMZ, and their ground-breaking reporting on  Khloe Kardashian posting pictures of  pies on her Instagram that she claims to have baked,  but closely resembled pies from a popular L.A. bakery. And yes, I am well aware of the irony that while I’m complaining about something so mundane being news, I am nontheless going to waste my time and yours bitching about it being news in the first place. What can I say. it’s trickle down economics.

Note: I know nothing about economics.

So in order to draw attention away from what the history books will describe as ‘pie-gate,’ Khloe went ahead and flashed what may be her labia. Or it may be a a honey-baked ham, it is the holidays. If you’re dying to turn your head ninety degrees, while furrowing your brow and mumbling ‘what the fuck,’ then you can see the picture here. I for one have small children in the house, and when CPS finally comes to investigate, I don’t plan on having pictures like that stored on my computer. Not that there’s any connection between Khloe Kardashian and gross negligence, but it might reflect poorly on my character.

Last week Jennifer Aniston’s husband, Justin Theroux went on Live with Kelly and Michael and revealed how he ALMOST DIED scuba diving on their honeymoon.

Justin describes a how his first diving lesson was a lovely, pleasant, non-life threatening experience, but on the second day he went out on a boat, and the instructor was *gasp* FRENCH, and his English wasn’t very good! After diving to a depth of 40 feet, Justin realized his oxygen was low, but the instructor ignored him.

Justin was eventually able to get the instructor’s attention

“He pulls the emergency respirator out, puts it in my mouth, hits this clear button, which sends all these bubbles out, and it sends water down my throat,” Theroux continued. “So now I’m also linked to this jerk because now I have to swim alongside him and finally he rolls his eyes and we go up.”

The instructor rolled his eyes? Doesn’t this kind of play into the condescending French stereotype a bit much? Haven’t the French been through enough this year Justin?

Now, all and all this would be a terrifying experience, but then I read Justin’s Shopping Tips on Yahoo!  this week and realized Justin might be a bit of an exaggerator.

“We usually have a great Christmas tree-trimming party and that’s always a lot of fun,” the Leftovers star told Yahoo Celebrity, noting that they “let the kids do the actual tree trimming,” but that hardly means he and the Mrs. are off the hook. “The next morning we go out and we realize little kids are short and they’ve really almost killed the tree by hanging all of the ornaments on the bottom,” he laughed. “The next morning, we have to fix it. We get up early and go in and we redistribute the ornaments correctly, you know, so the tree doesn’t die.” So far, their rescue missions have proven successful.

They almost…killed…the tree? With ornaments? I didn’t realize improper ornament distribution could be fatal to a tree. Isn’t the tree already dead? And even if they used a live tree, could a bunch of ornaments hanging on the bottom kill it? This one got to me so much I did some extensive googling to see if something like that could really kill a tree. Nothing. What the fuck is he talking about? Plus he adds the “you know” like it’s established fact.

“I don’t wank off in the toilet because, you know, I don’t want an army of DNA identical mutants of myself forming in the sewer.”

Add this to the the time when Jen described how eating at McDonald’s almost killed her, and it seems Justin and Jen live their lives in a bullshit, la-la wonderland where a bowel movement becomes a life or death experience, cuz you know, the mutants, and they save the planet on a weekly basis buying over-priced organic at Whole Foods.

Update: Michael Cavallari’s body was discovered three miles from his vehicle and his believed to have died from exposure. Considering it’s a real crap shoot as to whether members of my own family will survive the holiday season, think fireworks accident or suicide by Christmas lights, I won’t comment further on this. Now the the real question is will Jay Cutler be able to overcome the Redskin’s defense and seal a victory in week 14? Because something tells me he’s gonna play.

Kristin Cavallari’s older brother Michael, has now been missing for well over a week, under circumstances that would suggest he’s either seriously injured or dead, but that didn’t stop her husband, Chicago Bears quarterback Jay Cutler, from playing in yesterday’s game against the San Francisco 49’s, because Football!!!!! Fuck yeah!!!!

Michal Cavallari’s car was found on a dirt road off Highway 70 in Utah, with his laptop and cell phone still inside. Kristin has kept silent on the issue until today when she tweeted:

I appreciate the thoughts &prayers that have been extended to me & my family. I have such gratitude for those that have shared their support

Which uh, I guess is something. Kind of selfish in a way, making it about you rather than asking people to look out for him or come forth with any information, but I guess people on Twitter aren’t likely to be taking their head’s out their asses and being aware of their physical environment anytime soon anyway.

In her defense, she did just give birth two weeks ago, so you know, tweeting is pretty hard. I guess? All that thumbwork.

It was also revealed today that  her brother was arrested November 23rd in Orange County after stalking a woman for several weeks and knocking at her door while carrying a shot gun. What hasn’t been revealed is who bailed him out? Where did he get the gun? What was he doing in Utah? Why couldn’t Jay Cutler throw a touch-down pass in overtime against the ‘Niners? Why is Kristin Cavallari even relevant anymore? Who cares about her? Who ate my turkey pesto sandwich that was in the fridge? Is Jon Snow going to come back in season six or what? Why do I pee a little in my pants when I run? Why doesn’t anybody listen to me? I’m lonely. 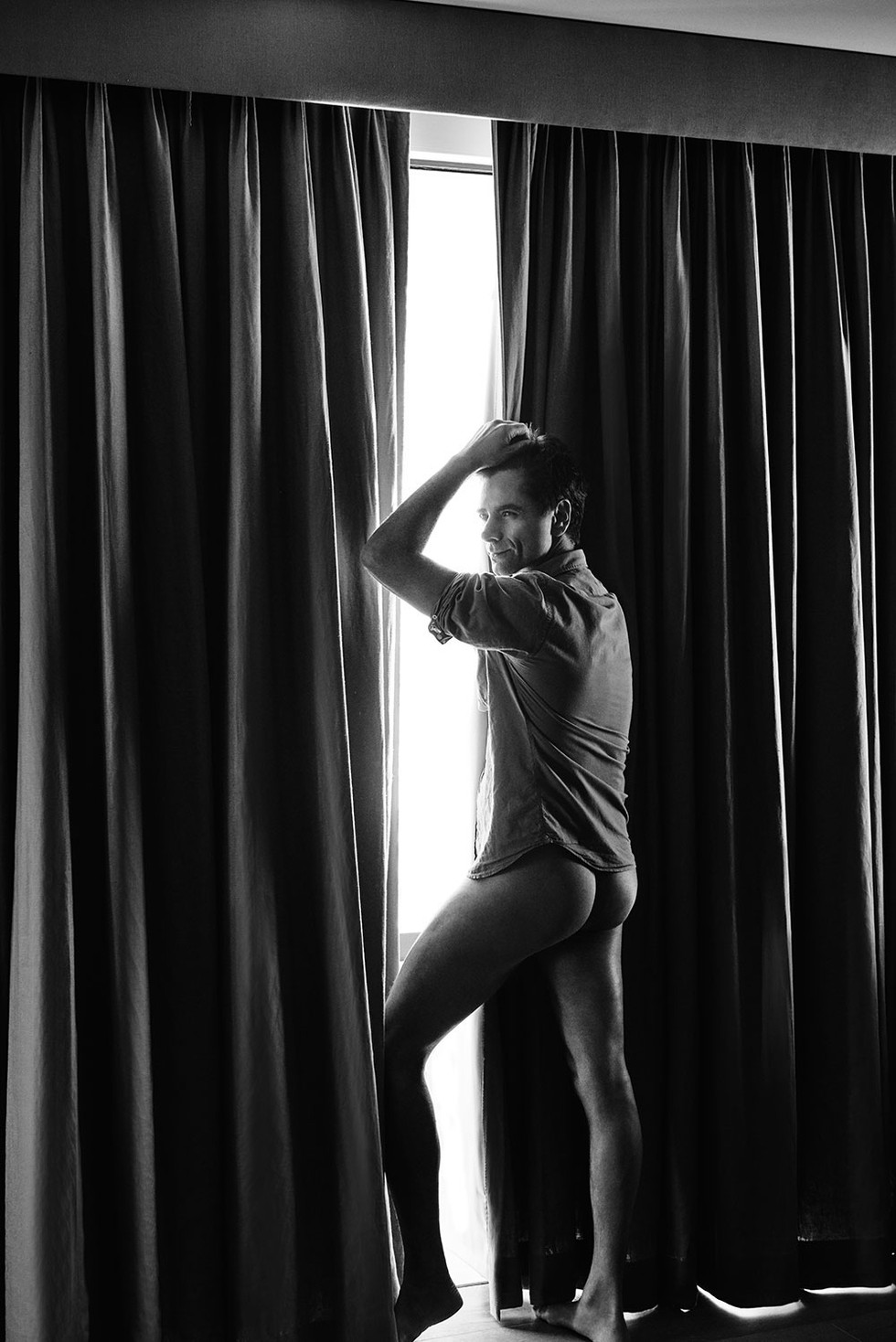 John Stamo’s new spread in Paper magazine came out today, and the first thought that came to mind was “ewww, gross.”

For clarification, I am a straight woman and I do think Stamos is good looking, but I can confidently say I can’t think of a single circumstance in which a man posing bare-assed would be considered attractive and ‘masculine.’  The bent knee, the hand in the hair, the hotel curtains, this looks like  a spread for Honcho. What is he looking at? And why is he smiling?

Not to mention I’m zooming in pretty damn far and I don’t even see a hint of dangle. What’s up John? You’re Greek. I at least expected to see a bit of ball hair.