I’ve been holding off on writing about Lindsay Lohan until her court date in the hopes that I could tell you that she’d been sentenced to death row, and that the streets are now safe from her drunk driving and second-hand smoke. Somehow, I misinterpreted my ‘Celebrity Sliding Scale of Justice,’ because Lindsay managed to take a last-minute rehab plea deal and completely avoid any jail time.

What was totally awesome about all this was Lindsay’s drug-fueled attempts to get back to LA from NYC in time for her court appearance. After missing her first flight, Lindsay got off her second flight because she believed something was wrong with the plane.

Aside from crashing cars, doing drugs and giving hand-jobs in alleys, Lindsay is also a freelance aerospace engineer and tinkers in mechanics. So when she says “get me off this plane, it’s gonna crash!” you can bet the plane is going to make an uneventful transcontinental flight and land safely in Los Angeles.

Fortunately, Lindsay occasionally blows Chinese billionaire, Poe Qui Ying Wangsuo, also known as Mr. Pink, after his line of energy drinks he pays Lindsay to promote. (FYI, if you’re going give guys blow jobs for favors/money it’s best to find a rich Asian guy, they shouldn’t even call that  a job.) Mr. Pink kindly lent Lindsay his private jet, so she could fly to LA and still show up late to court. Then, Lindsay once again made a complete mockery of our criminal justice system, kicked a baby on her way out of the courthouse, and spent the rest of the day drunkenly running over kittens and puppies. The End. 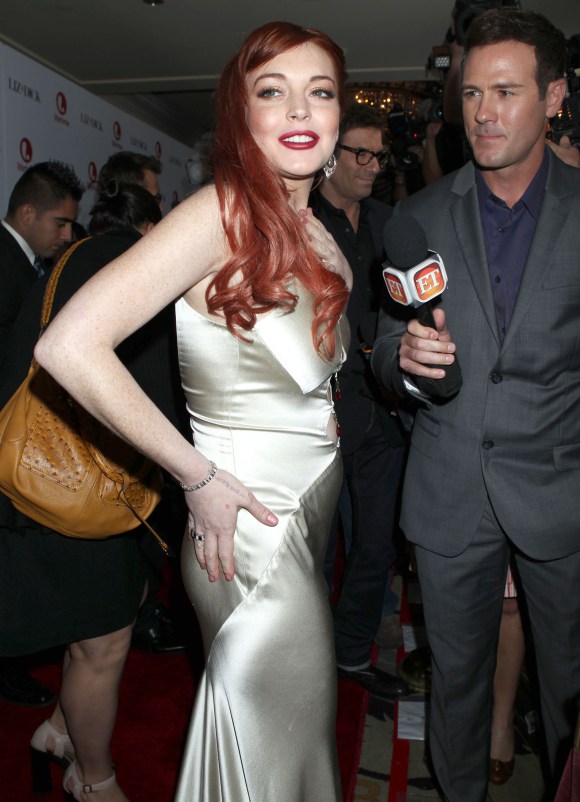 It’s been another wild 24 hours in the wacky, fun-filled mess of a life that is Lindsay Lohan, leading up to her court appearance this morning. A court appearance Lindsay tried to get out of by having her new lawyer, Mark Heller send a note to the court saying she was too ill to fly from New York to LA, just like in high school.

Then a bunch of pictures were posted on TMZ of Lindsay walking around SoHo smoking cigarettes which kind of blew a hole in that story.

Then Lindsay and Dina did a few lines, and started to get paranoid wondering if maybe she should show up to court, so she called some ‘friends’ (i.e. her dealer, drug dealers have a pretty good understanding of the criminal justice system) who advised her to return to LA for the hearing. So Lindsay and Dina got a last minute flight landing at LAX at 12:30 am and then got turned away from Shutters hotel because she trashed a room back in 2007. So I’m guessing they slept in a dumpster in an alley in Venice Beach.

Fast forward to this morning, Lindsay makes it to court on time where the judge, Stephanie Saunter, told Lindsay she was glad she was feeling better and set a trial date for her lying-to-cops case for March 18, with a pretrial hearing on March 1. Saunter then announced she would be retiring March 1. Wait, WHAT?!!

Does Lindsay Lohan have ties with the mob or something? Isn’t it a little convenient the  hard-ass judge who was supposed to set Lindsay straight is retiring the day the trial is supposed to begin? Who the fuck is Dina Lohan blowing?

The only way I’m going to be okay with this is if they replace Saunter with Judge Dredd and he executes Lindsay and Dina on the spot.