Britney Spears has already been photographed at her lowest points so many times that she no longer has any problems appearing in public with no eyebrows dressed as a Friends-era escort, especially to attend something as insignificant as church, a place, which I might add, is not nearly as opulent as Britney’s guest bathroom, which she doesn’t even wear pants in, so consider this a step up.

“Ya’ll mean to tell me the Lord don’t got heated towel holders? He really did suffer for my sins.”

I’m not a Christian but I feel pretty confident speaking for Jesus when I say that he would totally disapprove of suede boots, especially with a dress that even Kelly Bundy have rejected as “too trampy on the bottom, but not trampy enough on top.”

“Boots in Summer? Thou hast forsaken me.”

But Britney gets a pass from me because I’m a mom too and I’m lucky to make it out of the house without my tits hanging out of the bottom of my shirt, in a bad way, so she actually beat me this round.

It also appears that Britney’s boyfriend, normal guy willing to play along in order to reap substantial fringe benefits, attempted to match Britney’s mix-matched top and bottom by pulling off the same look. His top says “best man after downing ten drinks at the reception and making out with the bride’s mother,” while the bottom says, “fuck you God, this bitch is worth $200 million.”

Above: Despite being worth an estimated $200 million, Britney Spears stays true to her Southern upbringing and prefers to wear stained sweat pants and over-sized sweaters.

Everyone, and by everyone I mean the half-wits at TMZ, has been going ape shit over Britney Spears’ Valentine’s Day sighting with a mystery man. And now we can end our incessant speculation and go back to our mundane, pathetic lives because through investigative journalism worthy of Bob Woodward, TMZ has discovered the guy’s name is David. Just David, no last name. Not even a ‘David but friends call him Dave,’ or ‘David that guy who got caught jerking off on kittens in the pet store.’ Just David.

They did manage to find out that he’s originally from Atlanta, he works for a law firm doing field research, which I’m almost positive mean he’s a professional stalker, and he’s a decent tipper. I’m glad to see that Britney’s going back to her Southern roots as far as dating goes; because Britney’s really just a small-town, country bumpkin at heart and she’s not going to find love living in LA.

Britney doesn’t know it yet, but her true love is the guy working at the feed store in PoDunk, Alabama, named ‘Possum’ who’s missing two fingers.

Earlier this week, Foo Fighter frontman, Dave Grohl, made an astute, and might I add accurate, statement about Britney Spears while filling in for Chelsea Handler on her talk show, “Chelsea Lately.”

“She kinda seems dead inside,” Grohl said while talking about the pop star with the show’s panel of comedians. “There’s nothing behind her eyes, there’s nothing in her boobs anymore.”

Even though Grohl’s statement is painfully true, it didn’t stop some die-hard Britney fans from admonishing him on Twitter. Because I’m sure he reads those.

Here’s a few of them:

– Dear Dave Grohl, how about you leave the Britney jokes in 2007 where they were actually relevant
#cheapshot #ass****

-Dave Grohl can f**k right off. Nobody cares about what you think about Britney you sore loser.
– Dave Grohl, you’re nothing but a piece of s**t, How dare you to talk about Britney Spears like that?!?!?!?

God, I hate to see what they would do if he said something that was actually mean-spirited. Have these people seen Britney lately? She walks around gas stations and drug stores in her pajamas, clinging on to puppies and children trying to fill the emptiness in her life with  Fritos and Mountain Dew.

“Dead inside,” is probably the most succinct way of describing that. 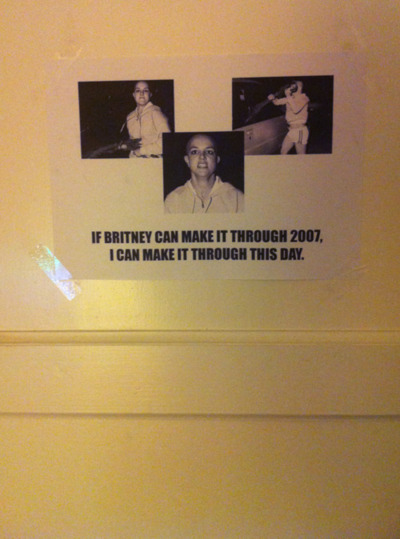 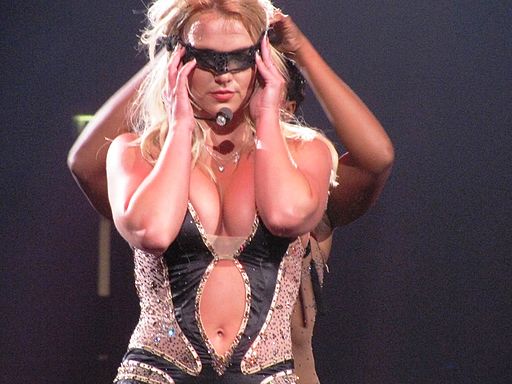 Britney Spears has had her busiest week in years, quitting her job, breaking up with her fiance and possibly moving to Las Vegas. It sounds like the plot of an empowering woman-having-a-midlife-crisis book-turned-movie that would star Julia Roberts. But this is Britney Jean Spears we’re talking about so imagine that but with more chili cheese fries, tetanus and menthol cigarettes.

Where to begin. First it was reported that Britney Spears quit her job at the X-Factor because she was about to be fired.  Then she split up with her fiancé, Jason Trawick,who’s been babysitting her for the last couple of years while conveniently having sex with her too. It’s reported the two split because Britney wants to do more baby making (she’s from Alabama, it’s inherent,) and he’s already had it up to here with the two hellions that Britney already has. Now, TMZ is reporting that Britney is in talks to move to LasVegas to headline a show and could potentially earn over $100 million a year for the gig.

In totally unrelated news that should be related, in the newbook  by pulitzer-prize winning author Lawrence Wright, Going Clear: Scientology, Hollywood, and the Prison of Belief, Wright details how the Church of Scientology auditioned several actresses back in 2004 under the guise of a role in Mission Impossible, but they were really looking for a third wife for Tom Cruise. The book claims Scarlett Johansson, Jessica Alba and Lindsay Lohan were all considered for the role of ‘beard’ before church officials settled on Katie Holmes.

How are they missing this? Britney might as well have a gigantic target on her forehead.  The girl hasn’t made any decisions for herself since  2008, she’s the exact kind of celebrated, malleable dim-wit a cult would kill to get their hands on. And it wouldn’t even be hard, they would just have to pull up in an ice cream truck, throw a burlap sack over her head and tell her they’re taking her to Taco Bell.  It’ll be three years before she realizes she never got that Nacho Bell Grande and extra large Mountain Dew.

Us Magazine says that Britney Spears is going to be fired as an X-Factor judge, because staring blankly and chewing gum isn’t worth $15 million a year.

“Britney will get the boot,” an insider tells Hot Stuff of the pop star, who joined the show in May, along with fellow newcomer Demi Lovato. “Producers wanted her for the long haul, but it isn’t working.”

One reason? Spears’ $15 million contract, which sources say the low-energy mentor hasn’t earned. “They paid all that for her to say ‘amazing’ and offer half-claps,” a second insider tells Us.

Adds a third source of show co-creator Simon Cowell, who is leading the charge to axe the performer: “He wanted crazy Britney, but he got boring Britney.”

Boring indeed, as long as Britney’s taking her meds she’s about as dull as a lobotomized cantaloupe.  I can’t blame Simon, the empty chair Britney leaves behind will at least have ironic appeal and probably offer more insight and perspective than Britney could on her best day.