Last night Taylor Swift opened the Grammys with a show-stopping number that proved what a seasoned professional the 23-year-old has grown into. And by that I mean she lived out some circus fantasy while awkwardly prancing around in a lion-tamer suit. Where’s that Mexican,man-eating tiger when you need him?

During her performance of We Are Never Getting Back Together, Taylor summoned her best cockney accent and said “So he calls me up and he’s like ‘Ah still louve you’ … and I’m like ‘I’m sorry, I’m busy opening up the Grammys…and we are never getting back together!’” (side note: I hope Taylor dates an Asian guy soon so she can make fun of his accent and everyone will call her a racist.)

This attempt at a diss was obviously directed at Taylor’s ex, Harry Styles, the 18-year-old who dumped Taylor because he realized he could be buried up to his eyebrows in easy pussy instead of watching Antiques Roadshow and listening to Taylor harp on about the new flatware she has her eye on. But in Taylor’s powderpuff-princess world, Harry begs her to come back and she tells him she has better things to do such as perform at the Grammys. This sounds just like most of my revenge fantasies but without the sodomy.

To top off her evening of retribution, Taylor went home and played dress up with her cat. No I’m serious. After the Grammys she tweeted the picture below of her cat, Meredith, with the caption “Video shoot early tomorrow, so my Grammy after-party situation looks like…” which we all know is bullshit because who would schedule a video shoot the morning after the Grammys? It’s not like Taylor works the 6 am shift at Denny’s, I’m pretty sure she has some say in her schedule.

We all know the real reason Taylor went home and cried into a hand-crocheted pillow covered in cat hair was because nobody would dare invite her to a party, lest her next single be called   “Everybody at the Grammys after-party was drinking and having a good time and ignoring me while I sipped ginger ale quietly in the corner by myself.” 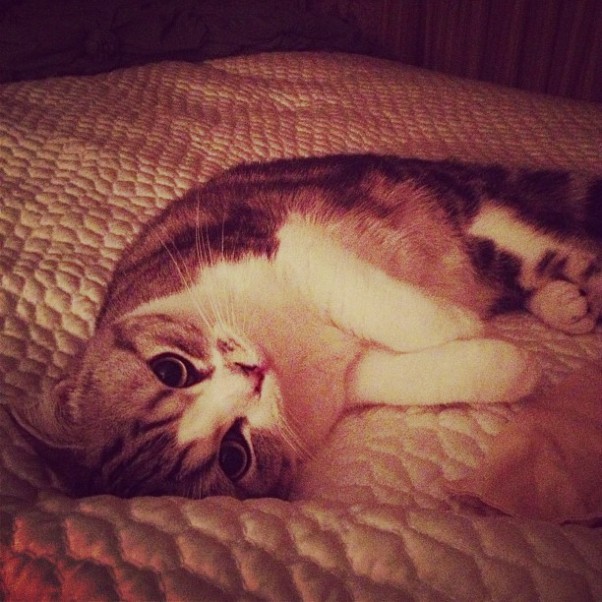