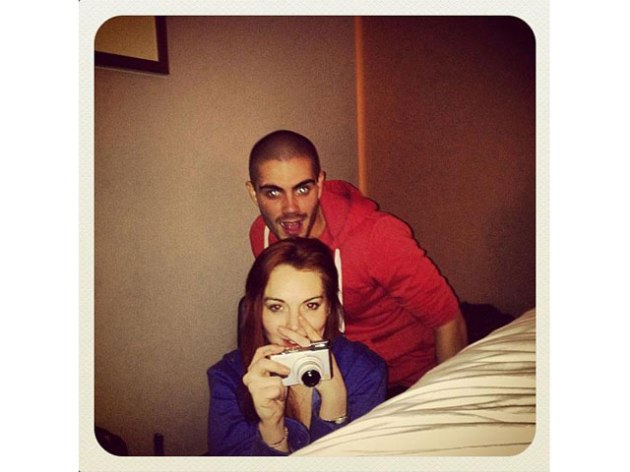 Another week, another series of mind-boggling Lindsay Lohan stories. Lindsay posted the above picture to Instagram yesterday then promptly took it down, because Max George in no way wants to acknowledge that he’s sleeping with the drug mule. That would be like sleeping with the girl who cleans the toilets on the tour bus, but worse.

Today, TMZ is reporting that Lindsay turned down a half-million dollar offer to appear on Dancing With the Stars. Considering Lindsay is a few eight-balls away from giving $20 hand-jobs in the alley behind Chateau Marmont, and that she owes thousands in back taxes, and thousands more to her lawyer, and she’s being sued by a former assistant, I find her turning this down a little surprising. Especially since we all know Lindsay makes such good decisions.

According to the report, Lindsay would never consider reality TV and only wants to stick to films. Even though the past five years of Lindsay’s career has been a reality circus of  arrests, court appearances and fights, Lindsay draws the line at getting paid for dancing on a respectable and popular TV show. I mean what could be more embarrassing than accidentally doing an inside turn when you were supposed to do a ball-change?

“That’s right, I got fuckin’ standards ya blow hards,” Lindsay responded, a Parliament dangling from her lips as she scratched her crotch and swigged from a half-empty bottle of Poplov.

1 thought on “Lindsay Lohan Rejects Dancing With the Stars”